Steven who is Doncaster Speakers President

Elizabeth, Our Past President and now Area Director

Maria, Past President and Past Area Director and now our Divisional Director.

Another well-organised and delivered session on Monday 8th August.

Val and Jean were speech evaluators for the evening and it was great to see 2 experience toastmasters deliver their evaluations.
Elizabeth gave us a fantastic education session on how to set up zoom for our hybrid sessions. She is confident with ICT and it was very kind of her to share her knowledge and expertise with us to make sure we run high-quality hybrid sessions at Doncaster Speakers. It’s a huge advantage at Doncaster Speakers that every session we can join face to face or on zoom.
Tabletopics was run by Andy this evening, this was all about storytelling. The weirder and more wonderful the stories the better they were! We had a lot of fun with the session and Stephanie evaluated this session making sure everyone got quality feedback for their speeches.

Attending the meeting were two special guests from our sister club in Sheffield, they were both made to feel welcome.
The evening was rounded off by our President Steven and we had 3 worthy winners.Best Speaker- StevenBest Tabletopics- ArthurBest Evaluator- Lianna

Written by our General Evaluator for the night Lianna

Please also check out our facebook page for up to date news and picture of our winner.

What a meeting, the room was full to capacity and we needed to find more chairs, we had the official handover of the Presidents chain,  2 experienced speakers go head to head and a number of first timers who took on roles that they had never done before in our club.

Elizabeth after the handover of the Presidents Chain with our New President Steven Bisby:

The people taking roles for the first time were:

On top of all of those, we have two potential new members come along to see how it worked, one of which took part in our Table topics and received his first timer ribbon from Steve.

The meeting theme was “Be phenomenal or be 4gotten”, a passionate theme from our Toastmaster Donald.  He encouraged us all to be more than average and be memorable.  As theme’s go, it was perfectly in line with everyone at Toastmasters as we all strive to be more.

Our Education slot was by Stephanie, our VP Education entitled “So, what happens now” an encouraging talk on Pathways and motivating people to take the next steps on Toastmasters education challenge to every member.

The two experienced speakers were:

Andy with a title “Still learning”, about his journey and importance of body language in speeches

Maria with a title “9 months of service” about her time in Toastmasters and the roles that she has taken on recently.

The winner of best speech was Andy:

On the table topics we had joint winners with Elizabeth in the room, and Val on line, giving Steve the issue of presenting the ribbons to both of them at the same time:

Last but certainly not least, we had the best evaluator, won by our General Evaluator  -Thashini with her excellent feedback to everyone who had not been evaluated already.

Overall a good meeting, with lots of people trying things for the first time and a lot to take away.

Our Toastmaster year goes July to June, and as such we welcome Steven Bisby to the role of President.

Steve has been in Toastmaster for a number of years now and is famous for his sense of humour and attention to detail. Having just finished a “tour of duty” as our VP Education (for those of you who may not know, the busiest role in the club), he now, deservedly steps into role of President.

Why not come along, meet him and see what the new year has to offer?

Our Toastmaster year starts in July, and traditionally the incoming president takes the helm to set out their vision of the year.

Steve has big shoes to fill, replacing Elizabeth, our outgoing President.  Steve started by thanking Elizabeth for her 2 years in charge, especially as that covered extraordinary times battling Covid and keeping the club going.

He then shared with us his vision for the coming year that was well received.

It is safe to say that the technology was not on our side at this meeting but Donald and Stephanie made it work the best it could be on the night.  That said, a meeting is never about the tech, it is always about the people.  Steve as TM, helmed a great fun, informative meeting that kicks off the year well.

We had another good omen for the future, Donald brought along a first timer Carrie, who I will talk about in a bit.

3 great speeches on the night, with a mix of experience.

Stephen delivered a very good Ice Breaker entitled “Avoid at all cost”.  It was funny, well organised and there is no way I would have known it was his first speech if I had just walked in and listened to it.

Macaulay is turning into a great storyteller with a speech entitled “Monster Mac”, the speech lived up to its imaginative title and Macaulay definitely brought the speech to life.

Donald’s speech (It’s time to rumble) was about how he met Muhammad Ali, and the effect that it had on his life.  He delivered it with his energetic and enthusiastic style while also making us understand the once in a lifetime experience.

Of course, each speech had brilliant evaluations which included commendations and recommendations to make the next talks even better.

Next we had a short Ed slot on “Why I want recommends!”.  In life it is easy to give positive feedback, but in TM, we also give recommendations.  Andy’s Ed slot concentrated on the importance of giving balanced feedback, not just the positives.

Table Topics was run online by Lianna, and was a balanced and fun challenge for those who took part.

The 2 winners were polar ends of the Toastmaster Journey.  We had Carrie on her first ever meeting along with our most experienced member Andrew Miller. 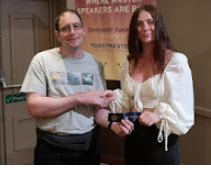 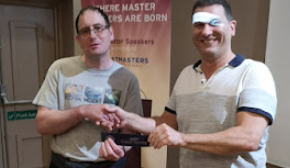 Carrie also picked up the First Time speaker ribbon for taking the stage for the first time. It can be nerve wracking coming to a club for the first time and speaking, and Carrie dived straight in, I am sure with the support and encouragement of Donald who bought her to our club.

The Evaluation contest was won by Andy for this Table Topics Evaluation.  After the meeting Andy was heard to say that when the quality of the question (by Lianna) and the contests is so good, it is an easier job than normal to do TT Eval.

The other roles for the night were:

In summary, a good start to the year, a few lessons to be learnt about the tech side and already a very promising first time appearance by Carrie.  I am looking forward to another good year in our club.

July sees the new Toastmaster year, and we say a big thank you to Elizabeth who guided us, with her committee, through the covid year and has kept our club going.

Steve will take on the role of club President in 2022/23 year, with a new committee and some good ideas that build on the last few years.

Watch this space for regular posts on what we are doing to learn, enjoy and share.