Now that the summer season is out of the way, the remainder of the calendar year can start in earnest.  Consequently, our Toastmaster for the evening, Pauline Westrop, chose a theme of “Back to School” for us to run with. 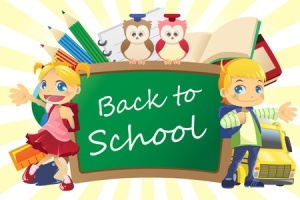 As is often the way on the first day back at school, not everything went to plan, with a number of people having to cancel.  Which just meant that everyone else had to improvise and rally round and fill in for any roles that became vacated.  As a Toastmaster, you never know when you may be called upon to step up and perform, so this was carried off with the aplomb you would expect.

Officially, this was Pauline’s first meeting as a Doncaster member, although she is a seasoned Toastmaster.   It was also good to welcome Natalia Skorczewska as our newest member, along with  vistors and potential new members, Gerard Cahill and Adam Browne.

Meanwhile, Derek Lucian, as Grammarian,  set us the word “Humdinger” as the word of the day.  A word with a very interesting history which may be worth you looking up.

Three good speeches tonight.  Julie Pitcher, with only her second formal speech, regaled us with tales of her recent trip to America and the inspirational stories she’d picked up from the Kennedy Space Center (sic).

Richard Bluck has started his Advanced Manuals and his requirement to deliver a technical speech meant that we were educated on which type of fire extinguisher we should use in which circumstances.

The eventual winner of the club vote for the evening, Stephanie Bisby, varied her voice for us in Speech 6 from the Competent Communicator manual picking on the differences between English and American that she’d discovered when writing her first novel.

Shelagh Jones ran an education slot on how to judge a competition.  Very useful and timely as the club competition is to be held at the next meeting.

Bridget Pearson was in control of the Table Topics and, riffing off of the Back to School theme, challenged us to think of times that we had returned to other places and events and how we felt.  Winner of the evening, and keeping it in the family, was Steve Bisby.  He didn’t like the question he was given, so answered one from earlier about his first house, because he preferred that one.  Why not?  When you’re on stage, you own it and that’s what it’s all about.

Following the awards for the night, including the Best Evaluator to Derek Lucian, who tied with himself as Grammarian and Table Topic Evaluator, there was a final reminder on the competition at the next meeting.

If you’re interested in chuckling along with the Humorous Speech Competition or watching random improvisation in the Table Topics Competition, then feel free to come along for a 7pm start on 26th September at The Regent in Doncaster.

We look forward to seeing you there.