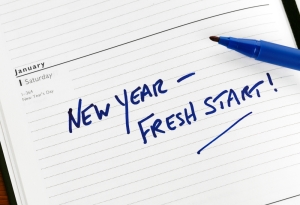 Sergeant at Arms Jean Stewart started the meeting on the dot of 7pm with a humorous but effective introduction to the logistics of the evening.

As it was the first meeting of 2018, Toastmaster of the Day Pauline Westrop chose “New Year Resolutions” as her theme for the meeting.   She did a quick run round everyone in the room asking them to complete the sentence “This year I  will….” which uncovered a promise to avoid murder and to refrain from aiding and abetting said murder as well as many more worthy goals.  We had two guests and Pauline covered all the conventions efficiently.

Stephanie Bisby as Timekeeper not only explained the reason for good time keeping but made sure everyone was familiar with the position of the timing cards in the unfamiliar meeting-style room setup.

New member Jane Franckeiss stepped in at short notice to take the role of Ah counter and did an excellent job in explaining her role.

Jean was also Grammarian and chose a word related to the meeting theme, Willpower, as her word of the day.

Bridget Pearson introduced Steve Bisby who was delivering Speech 7 in the Competent Communicator manual which helps uncover the ways to research the material in a speech. Steve gave us an amusing talk about the trials of life as a follower of Doncaster Rovers – a subject for which he had many years of research to plunder and cleverly linked specific examples to the theme of Be Prepared.

Pauline delivered an educational session around the forthcoming second half of the Toastmaster Year and the imminent start of the new Pathways programme in March 2018.

Jean had us back at our seats exactly at 8pm after a break for coffee and chat and the second half started with Bridget’s evaluation of Steve’s prepared speech.

She highlighted the parts which went especially well and, as is the way in Toastmasters, offered some points where the speech could be improved.

Table Topics, the impromptu speaking section of the meeting, was run by Andy Howell.  He gave speakers the unusual task of comparing the pros and cons of arguments. He called it “Rant and Rave” and it was really enjoyed by all the speakers.  Pauline Westrop, talking about small dogs, won the award for Best Table Topics speaker.

Andrew Miller gave helpful feedback to all the speakers which earned him the Best Evaluator award.

Jane gave feedback as Ah counter and commented on how hard it is to focus on her role and not get diverted by the content of the speeches.

Jean gave her usual entertaining look at all the language used during the meeting – and ended up saying that “I think you are all bonkers!”

Which summed up an enjoyable, entertaining and instructive meeting perfectly.

The award winners were: